You are here: Home » Trekking » Trekking along the ancient "golden route" of the Bohemian Paradise

Six days of trekking in the beautiful protected nature park Bohemian Paradise (czech: Český ráj) past historic fortresses and castles. You will see a varied cultural landscape along the way, sandstone rock labyrinths and traditional buildings in tiny villages along the 94 km long route. Accommodation is provided in hotels or pensions, in private family or private more bedded rooms with own facilities. The starting point is easily accessible by car or by bus, there is also direct connection from Prague several times a day.

Detailed map of the tour

Day 1 On the Trail of count Wallenstein 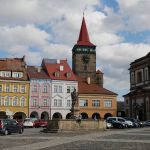 Arrival and check-in at a hotel in the center of the town of Jičín – gateway to the Bohemian Paradise nature reserve. The town experienced its “golden age” in the first half of the 17th century during the reign of Albrecht z Valdštejna (Wallenstein, Czech count and general). He had great intentions in developing this area. He built his residence here on the square. His death brought an end to his grand plans.

Tip: the town of Jičín is nice to wander around for half a day and to do some shopping. There are also various facilities such as a museum, a watchtower, a swimming paradise, various restaurants and terraces.

If you arrive early on day 1 and for whatever reason are bored, you can already take an advance on the walking of day 2. You can go by bus or with your car to one of the most beautiful places of the Bohemian Paradise: the “rocky town” of Prachov and take one of the two recommended loop routes there. It’s an enchanting rock maze!

Day 2 Wander Through the ‘Stone City’ 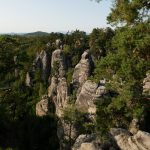 An ancient double avenue of truncated linden shows you the way out of the city of Jičín. Today you will visit one of the most beautiful places of the Bohemian Paradise: the Stone Town of Prachov , a complex of sandstone rocks in different shapes with an area of ​​190ha. Prachov rocks are sandstone pillars that stand close to each other, you get the feeling that you are walking between the towering buildings of a city – hence the name “rock city”.

Kilometers can be extended with an extra loops in Prachovské skály rock labyrinth.

Day 3 Along the Stream 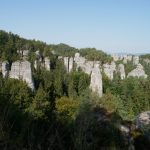 After visiting the ruins of the Gothic castle Pařez and reaching the Mladějov village, you enter the romantic valley of the Žehrovka river. During the walk through the wooded valley you will experience the tranquility of nature and the beauty of the ponds.

Day 4 Back to the Middle Ages, ‘Old Witch’ & ‘Beautiful Virgin’ 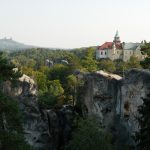 Today’s aim is Hrubá Skála Castle, nowadays a chique hotel and restaurant. From the tower of the Hrubá Skála castle you can see the Trosky castle ruins in the distance. From that fortress, with one fat (the old witch) and one thin tower (the beautiful maiden), the rulers in the past had control over the entire area. Today they are the symbol of the area.

Tip: castle ruins Trosky is very impressive to see, but given the kilometer schedule of the day, we have chosen to include Trosky in the route as an extra loop. If you get to the Věžické údolí – junction. You can choose to walk the extra loop. You have to count on about 5 kilometers extra, with at the end a very big calf bite to the top of the basalt rocks on which Trosky is built. 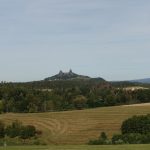 In the morning you start a tough day trip to the highest peak of the Bohemian Paradise: Kozákov (744m). At the start of the day you leave the woods and walk in open landscapes and through many lovely villages. Gradually you ascend higher and higher and on the mountain Kozákov where you will eventually be rewarded with beautiful panoramas. You slowly descend again via the red route to the town of Malá Skála in teh valley Jizera river. Along the way you will pass imposing rocks of Chleviste in Besedice – also called rock maze.

Day 6 The Heart of the Bohemian Paradise – Turnov

The red marked route leads to the castle ruins of Frýdštejn, which stands high above Malá Skála. From there you will return to the river valley and visit the city of Turnov. If you want to save some 6 km, you can jump on a blue marked route leading to a little settlement called “Záborčí” right from the village centre. You can do so by crossing the bridge over Jizera and walking up the steep path, which joins the original red marked route shortly. After visiting Turnov you return to nature and after only a few kilometers you are on top of the Hlavatice watchtower, and a few kilometers further you reach the castle ruins Valdštejn, which stands on a rocky cliff. From Valdštejn you descend to Sedmihorky where you take the (slow) train back to Jičín, quite an experience in itself!
Train journey back to Jičín can be done also from station Turnov-město, which enables you to cut the route by approx. 7 km. 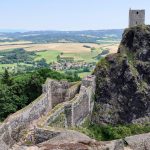 After breakfast, departure to your next destination …

Note: there are possibilities to tailor this tour to your needs. It can be shortened to e.g. a four days tour with three overnight stays. Just let us know your plans and we will send you a quote.

4 star hotel reStart is located in Jičín town. It offers a restaurant, fitness center, wellness, bar, free Wi-Fi, family rooms, a children’s playground, room service, a kids’ club and bike rental.
All rooms come with air conditioning, a flat-screen TV with satellite channels, an electric kettle, a shower, a hairdryer and a desk.

It is possible to relax in the chateau garden, which is a retreat from reality for all. The chateau has a permanent exhibition of the archaeology and history of the chateau and its surroundings, the history of beer brewing and the spa industry, the underground and much more.

Appropriate for regular walkers. Requires reasonable level of fitness. The trip covers an average of 15 km (5-7 hours) of hiking per day, with a possibility of extended walks (read more about explanation of our difficulty grades). There is a possibility to do part of the route per slow train, thus lowering the difficulty grade to Easy.

Minimum age depends ofcourse per kid but we recommand from 12 years.

Route Navigation in the field

You will walk mostly on sandy roads and even some gravel/asphalt paved roads. All trails are well-marked in the field. We advise  to follow only the marked trails and never try to shorten the path through the unknown and unmarked terrain. Off trail walking is strongly forbidden. We will provide you with detailed navigation instructions and maps (1:40.000 or 1:25.000).  You can call us 24/7 for assistance (however preferably during working hours only).

More detailed info on route navigation will be included in your booking documents.

This trip as available from April until October. In July and August it can sometimes be quite warm so if you want to bus sure to avoid those conditions we recommand april, mai, june, september or even oktober (indian summer :-)).  During weekends it is generally a bit more busy at some hot spots like Prachovske Skay and some catles like Trosky and Hruba Skala.

The busiest months are july and august. If you want to travel in that specific term, it is preferable that you book as early as possible. The flexibility of self-guided holidays means that there are no fixed dates and you can start your holiday on any date in the season, therefore please indicate desired starting date when booking.

The climate is typical for Central Europe. Humid summers with occasional hot spells, and cold, cloudy and humid winters. If you are planning a trip to the Czech Republic, weather will probably be one of your concerns. Czech Republic’s climate is comparable to that of southern inland Canada. Summer in the Czech Republic typically covers the period from June through mid-September. Czech summers are usually mild (20-27°C/70-80°F) and somewhat humid, with the highest temperatures up to 30-35°C/85-95°F (occasionally higher) for short periods. Such heat waves can be expected in July and August. Sudden showers and thunderstorms are common, so bring an umbrella or be prepared to dash for cover.

We recommend that you travel as light as possible because airlines nowadays charge larges fees for luggage above 15kg. Ideally, you should bring one piece of luggage weighing not more than 25 kg (to be checked in) and a daily pack (15 – 20 l backpack) for your daily essentials (snacks, drinking water, camera, etc). Below is a indicative list of what you should bring with you on this trip. More detailed information will be included in your booking information documents. If you need further advice, please contact us or ask at you local outdoor retailer.

Get Your Free Quote